How the Most Iconic Brands Developed Their Car Logos and Names

You are here: Home → How the Most Iconic Brands Developed Their Car Logos and Names

To a lot of people, cars are a means to an end; a tool to get you from point A to point B. To other people, cars are a status symbol; a physical representation of wealth, prestige, or power. But to the people who made them, the people who designed them, dreamt of their creation and then executed; they are more than a means or a symbol. Those who spent countless hours creating, refining, and perfecting every aspect of a car understand the importance of the emblem that represents them. Read on to discover the history behind the world’s most iconic car logos and names.

Origins of the Mercedes Benz Logo and Name

The Mercedes Benz name is a combination of two: Emil Jellinek and Karl Benz. Emil Jellinek helped create the Mercedes 35hp through his company (the Daimler Motors Corporation), and chose to name the vehicle after his daughter, Mercedes Jellinek. Karl Benz created what is widely known as the world’s first practical automobile through his company, Benz & Cie. The two German companies merged in 1926, and the first ever Mercedes Benz was brought to life.

The Mercedes Benz logo was created in the early 1900’s by two brothers commemorating their late father. Paul Daimler and his younger brother chose two symbols to represent the brand’s car logo and name— a three-pointed and a four-pointed star. This paid tribute to the star their father had placed on his home, which was meant to symbolize the future success of his company. The three-pronged star ultimately became the lasting version due to the Mercedes’ brand promise of creating vehicles for sky, land, and sea.

Cars with such iconic logos and rich histories deserve to be kept up well! Click here for helpful tips to keep up your car’s interior at home.

The story of the Porsche logo is somewhat of a mystery. The logo’s hazy origins are caused by two different tellings of the story—an American and a German version. The American version claims Ferry Porsche (Ferdinand Porsche’s son) dreamt up the logo on a napkin during a lunch with the American Porsche distributor, Max Hoffman. The German version disagrees, claiming that the engineer Franz Xaver Reimpiess designed the logo himself.

The Porsche’s car logo and name are a product of its headquartered location, the Free People’s State of Württemberg, and is modeled after its coat of arms. This coat of arms is both a representation of Porsche and a pivotal aspect of German history.

So, what is the animal in the center of the Porsche logo? Even upon closer inspection, it can be difficult to decipher. Much like the coat of arms, the animal in the logo is pulled from Porsche’s headquarters in Stuttgart, Württemberg, which was built over a horse-breeding farm. The city of Stuttgart’s seal featured horses, inspiring the black one featured on the Porsche logo. The black and red stripes are also pulled from Württemberg’s state seal, creating a powerful and strong design element. As if this wasn’t enough symbolism, the logo also draws inspiration from the Porsche family’s second home located in Swabia. History, controversy, and symbolism combined created the masterful logo we know today.

Check out our restorations on a beautiful 1974 Porsche 911S here! 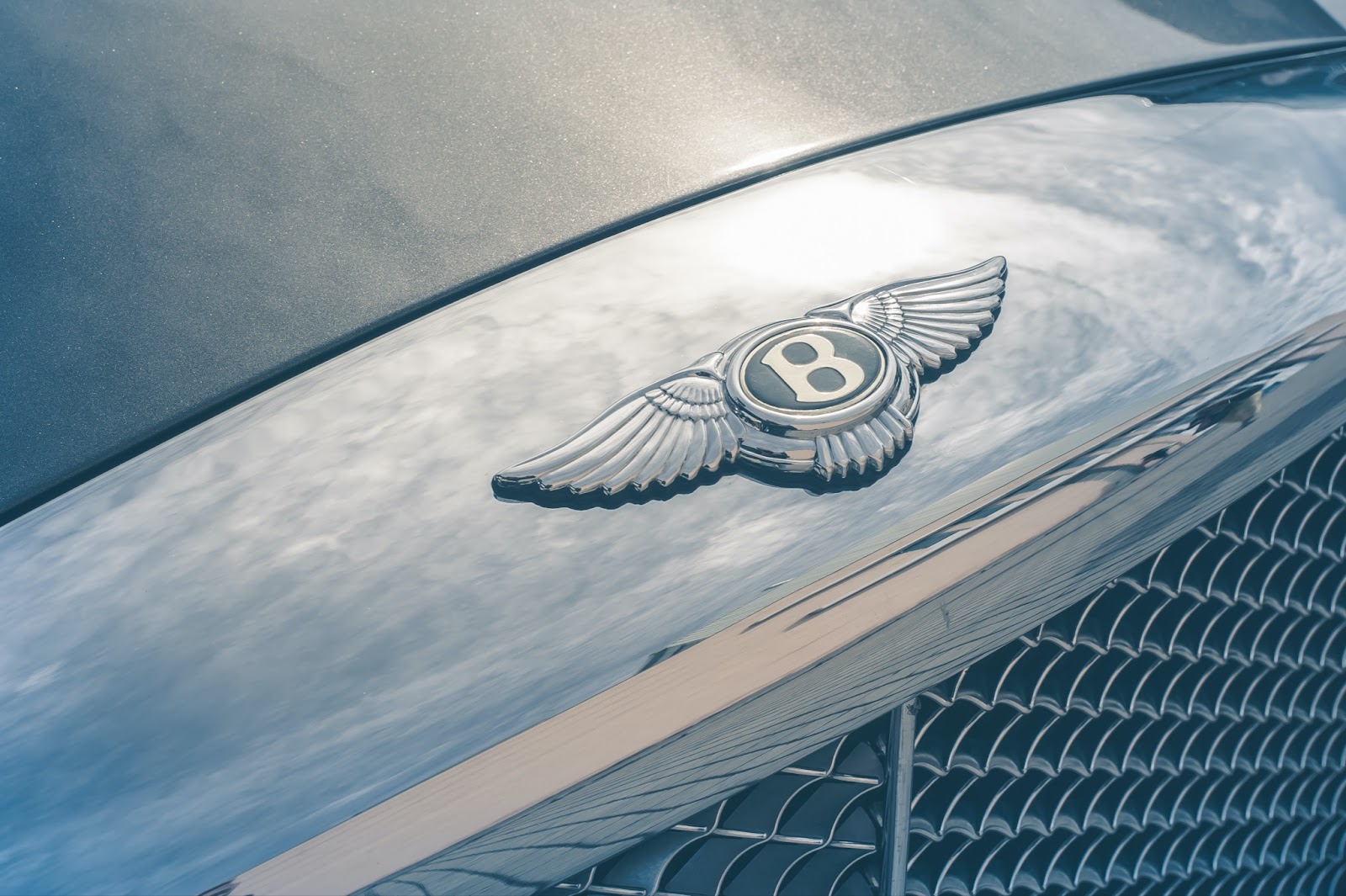 The Bentley logo is expertly designed to coincide with the brand’s core identity. W.O. Bentley (the founder) described the brand messaging in a single sentence: “The policy was simple… We were going to make a fast car, a good car, the best in its class.” Classic, elegant, no-nonsense, and dependable are all adjectives that describe both Bentley and its logo. Design matched perfectly with brand intent is one of the reasons this logo is an exceptional feat.

While simple in design, the meaning behind the icon is essential. The prominent ‘B’ pays tribute to the creator of the company and his contributions to the automobile industry, while the wings have two meanings attached to them.

The first meaning takes us back to World War I, where W.O. Bentley was a Captain in the Royal Naval Air Service, and engineered a more advanced aircraft for the British than they had created previously. W.O. Bentley had a strong connection to the art of flying, which is represented today by the wings featured on popular Bentley models.

W.O. Bentley’s engineering feat garnered his position into the Most Excellent Order of the British Empire (MBE), and won him £8,000 from the Commission of Awards to Inventors. With this prize money, he carried out his lifelong dream of creating his own automotive company.  As a Royal Air Service captain and a decorated engineer, W.O. Bentley’s love for motion was inextinguishable, and is reflected in the classic Bentley logo.

Thanks for reading! We at VIP European Auto have a true passion for the automotive industry and would love to answer any of your questions. Contact us here for any interior detailing work you need on your vehicle!